Sunday, April 23 is World Book Day, and why not?

If they can have a Hug a Shed and Take a Selfie Day, or Tuba Day or even No Pants Day, they sure as heck should have a World Book Day.

World Book & Copyright Day (that’s the full name) is a yearly event organized by the United Nations Educational, Scientific and Cultural Organization (UNESCO), to promote reading, publishing and copyright.  The UNESCO website teaches me that it “is an opportunity to highlight the power of books to promote our vision of knowledge societies that are inclusive, pluralistic, equitable, open and participatory for all citizens.”

You know what else I find grand?

What is it?  It is the experimental brainchild of author Jenny Lawson from Let’s Pretend This Never Happened and Furiously Happy fame.  The gist is this: On Booksgiving Day Lawson will post about the event on her blog.   People who are struggling – often financially, but not always – comment on her Booksgiving post.  In their comment they provide a secure link to their Amazon.com Book Wish List and an understanding of why they’re not in a position to buy books they’d like to have.  Then, people who are so inclined, may click that link, buy them a book (or more) on their wish list and Amazon ships it (we are not told their full name or address).

This year it was on February 7th and I didn’t stumble upon it until a day or two later.  But, neither The Bloggess, her readers nor I, feel kindness should have an expiration date, and it continued for a couple of days.

I read through the posts, found someone, and bought them a book.

Then, I did it again for someone else.

Then it started to feel amazing and here is why:

Everybody loves to get fun mail, right?   And who doesn’t love presents?  Well, put them together and BOOM someone you never met will stroll to their front porch one day and gasp “what’s this?!”

Just like that you have made someone you never met smile.  You just gave someone you never met has the ability to step away from their headaches and troubles of the day when they open their book.  Maybe for a little while they forget about their illness or escape, albeit momentarily, from their caregiver responsibilities of someone they love’s illness.  Maybe, just maybe, it transports them to a place – any place – from where they are in their life at that moment.

And just like that someone you never met has just felt the kindness and generosity of someone they will never meet.

That is the power of a random act of kindness and books.  That, dear friends, is Booksgiving Day.

So, maybe, a fun way to celebrate World Book Day is to surprise someone you love with a brand new copy of a book you have read and loved.  Just don’t tell them it is coming.  The surprise is the thing.  I know I am going to and I already love knowing they’re getting a great book and they have no idea it is on the way.

By the by, Hug a Shed and Take a Selfie Day, Tuba Day and No Pants Day all fall on Friday May 5.  Heaven help those who come in receipt of someone predisposed to observe all three simultaneously.

For those who prefer to listen, than read, I offer this:

As a Catholic, it is a big no-no to have any other Gods before me. I get that and I should be clear that I don’t have any. I don’t have any before me, behind me, beside me or any others. So I would then respectfully request you not misinterpret what I am about to write as taking the Lord, His name or His church in vain.

Hell, I love me some Jesus just as much as the next Christian does. I pray and I talk to Him every day. Am I a good Catholic? Mmm. No. No. But, my faith is important to me and it is a big part of my life.

That being said, you can believe me when I tell you there are few places on earth where my spirit will rise to the heavens like it does when I am inside a cathedral that houses the church of baseball.

Someone, I don’t know who, once said “90 feet between bases is the closest man has come to perfection.”

Last Saturday, a church opened its doors to me; a cathedral I’ve longed to visit. Clad in vestments of orange and black, their opponents in gray and navy, there was a  congregation of 38,000 strong readying themselves for a religious experience. I grant you there may not have been any laying of the hands, or kumbaya’s, but there was a warm sun and no there was no threat of rain.

The service begins as it usually does, with a hymn and a prayer. In our case the hymn was the Star Spangled Banner, the benediction was a cry from the pulpit behind home plate, letting the the boys know it was time to “Play Ball.”

For communion I had a soft pretzel, a hot dog, a bag of peanuts, four pints of Miller Lite … don’t judge me, I was at a game. And all of this was complimented by the Baltimore faithful singing Take Me Out to the Ballgame. 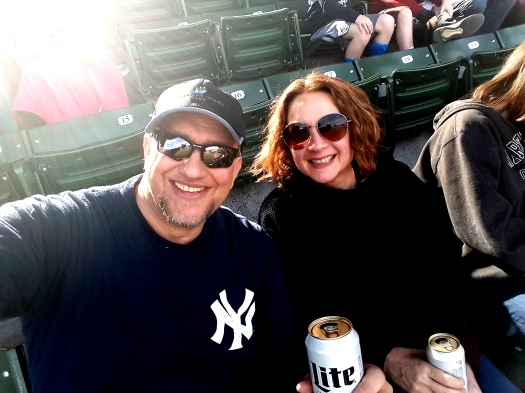 Three-plus hours later, and in spite of a 5-4 loss, my heart was singing Hallelujah and Praised be to Jesus … and at the risk of full-blown blasphemy, Praise be to Cal Ripken, Jr. and the house he built too.

For the first time since Oriole Park at Camden Yards opened 25 years ago, I stepped through its gates. Immediately I was impressed. Inside the stadium and out, its cleanliness was eye opening. The concession staff greeted patrons with smiles, even late in the game when they were tired. Lest I forget the kindness of Baltimore baseball fans. Holy cow.  One thing was for sure, I was not in the South Bronx. 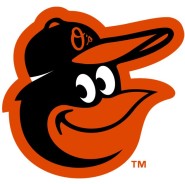 I mean, come on. Look at that face? How can you not love it?

As a kid, as I am now, I was and am a Yankee fan.  But the Orioles have always my “second team.”  Quietly, my second team.  To explain this would deserve its own blog post at some point.  Just not here and now.  Nevertheless, it began when I was a kid.  It may have been the colors, or it may have been their logo.  I will tell you, to this day, The Oriole Bird is my all-time favorite logo in sports.

But win or lose, on this day it didn’t matter. It was spending an afternoon in the sun at Camden Yards, right next to my girl, and a handful of her friends from college, all making for a great day at the ballpark; a great day of baseball.

After I wrote that last line it reminded me of something a friend of mine once told me close to 30 years ago.

“Every day is a great day for baseball, Patrick. It’s just some are better than others.” 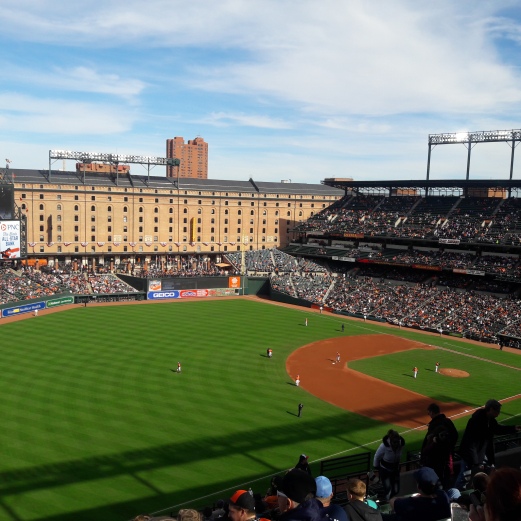 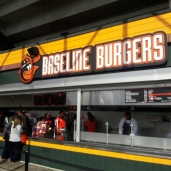 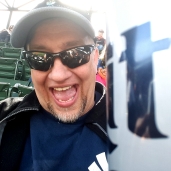 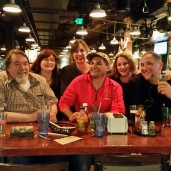 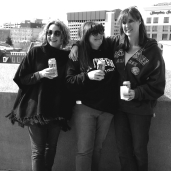 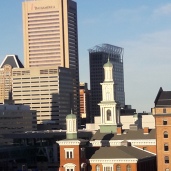 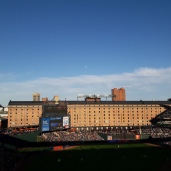 CORRECTION:  In the audio I mistakenly said 23 years ago … it is 25 years ago.

Well, no.  Of course not.  Hell, I did not learn what  lucubrate means until this week either.  I purposefully sought out a $0.50 word for my post title.  Why?  Keep reading, we’ll get there.

Among the books I finished reading this weekend was a memoir of poet and author Kathleen Rooney. 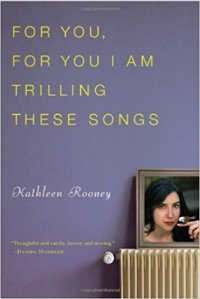 For You, For You I am Trilling These Songs is a collection of articles and short stories of a bright, twenty-something wife/professor/senate aide exploring her life.  Not exactly a genre most men in their 40’s gravitate towards, however, I wanted to experience more of her writing so I picked it up.

You see,  I loved her recently released novel Lillian Boxfish Takes a Walk.  I became an immediate fan of Rooney’s and I needed to read more of her writing.

It is important to note, however, that For You, For You is markedly different from her novel.

For instance, Lillian is a story of an early-to-mid 20th century Advertising writer who reminisces on her past.  For You, For You opens with the true story of our young and attractive twenty-something author, shortly before her wedding, splayed about to have the hair from between her legs hastily torn from the follicles of which they first made their appearance.

To be frank there were only a small handful of stories that I could connect with/empathize with, as a reader because – again – middle aged male here reading about a woman half his age.  There were some I found completely entertaining and laughed out loud.  But that wasn’t what I got out of the book. In addition to the joy I get from learning about someone, and something, new, there was more than just that here.

I found reading her books thoughtfully, and with patience, yields unexpected rewards.  Inspiration for one.  A treasure trove of words, words, words for another.

First, the inspiration.  I finished reading The Great Gatsby for the umpteenth time this past week also.  Early into it Nick introduces us to his cousin Daisy.  In his narration there was something he said that immediately made me think of Rooney.

I’ve heard it said that Daisy’s murmur was only to make people lean toward her; an irrelevant criticism that made it no less charming.

That is her.  That is her writing.  She makes me want to lean in.

Lean in and learn.

This leads to part two, which is the treasure trove of words.

I can’t say with any certainty this is true, but I think she left out of her memoir the time when she was three and swallowed whole the family’s Roget’s Thesaurus.  Dear God, this woman’s vocabulary is … is … oh what’s the word ….

The truth is I love seeing so many words I don’t know.  New words to learn.  New words to use when writing stories.  New words that I will hopefully use in their correct context.  New words while speaking to others and hope it produces a slight tilt of their head, kind of like my dog does when I say “treat? treat?”

And that, my dear  friends is why it is for me, for me I tell you, that I lucubrate these words … because she inspires me to want to learn …

… not so much to be an asshole.

BTW, lucubrate means to write or to study, especially by night, or to write learnedly.

… and I am getting more learnedly every day   🙂

Words Learned While Reading:    If you have seen any of my other blog posts there are those that have a number of words and their definitions that follow.  These are words I had no idea existed; words I had seen but didn’t know and words I could infer enough of their meanings in context to get by.  Here are some more words I learned from Kathleen Rooney’s For You, For You I am Trilling These Songs.  They are:

Commodification – the action or process of treating something as a mere commodity.

Aegis – the protection, backing, or support of a particular person or organization.

Rictus – a fixed grimace or grin.

Hegemony – leadership or dominance, especially by one country or social group over others

Balustrades – a railing supported by balusters, especially an ornamental parapet on a balcony, bridge, or terrace

Postprandial – during or relating to the period after dinner or lunch

Oneiromancy – the interpretation of dreams in order to foretell the future

Scrivener – a clerk, scribe, or notary.