Baseball and Hippos.  Has there ever been anything more right with the world?

I absolutely love Minor League Baseball.  It’s pro baseball at affordable prices, each seat is a great seat, there is always an easy going sense of humor in the ballpark and every effort is made under the sun to keep you interested between innings.

Locally we have the Somerset Patriots, an independent league team with a terrific stadium. I love going every year.  About an hour away we have the NY Yankee’s Double A farm team, the Trenton Thunder. In fact, Stacy and I got to see Andy Pettitte make a rehab assignment start there a few years back.

But what first got me into MiLB were the names, hats and uniforms of these teams.  It started years ago with the Durham Bulls (because of Bull Durham, the movie). Then, I  found (and fell in love with) the logo of the Chattanooga Lookouts, the Portland Seadogs (a softball team I played on) and now, my newest favorite – The Hub City Hippos.

This Double-A Affiliate of the Arizona Diamondbacks are actually the Jackson Generals, based in Jackson, TN

It started with a 2016 April Fool’s joke. The Jackson Generals announced they would become the Hub City Hippos for every Friday home game that season. Enough people were on board with the idea last year, however, that the team decided this year to do it for real.

An article on BaseballAmerica.com reads, “We wanted to pay homage to the hippopotamus. Locals know that hippos are a major part of the ecosystem in West Tennessee,” Generals assistant general manager Nick Hall said. “The Generals are honored to be the first organization in the region to rightly honor the species.”

It went on to say “The designs for the caps and jerseys were done in-house, marking a second team’s departure from the two minor league design kingpins—Brandiose and Studio Simons—this season. The Lowell Spinners went to FS Designs for their new artwork.”

So, you know I had to … and I did … but alas, they’re not available online.  So, I contacted the store directly and for the low low price of a partial mortgage payment, I learned that I, too, can own my own Hub City Hippo fitted cap.

I’m not sure if you hear/saw that so I’ll just put it out there again.

Naturally I stopped for a moment to think this through, catch my breath and ask myself if this is something I really wanted to do.

But then I asked myself if this is something I really want to spend my money on?

… and as I ponder the pros and cons of the purchase I remind myself of a mani/pedi that Stacy got from a really nice Spa a week or two ago.  She dropped nearly a hundred on that.  Nearly a hundred bucks to get the nails did. 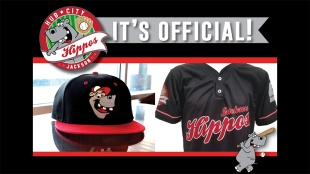 I take another look at the face of the hippo on the hat.  I LOVE IT.  I really do.  But is it worth the money?