I have happily come to learn that a favorite Minor League baseball player of mine is a nominee for the USA Today Minor Leaguer of the Year. Zack Littell, a pitcher for the Minnesota Twins AA affiliate Chattanooga Lookouts joins Ronald Acuna (OF, Atlanta Braves), Rafael Devers (3B, Red Sox), Jack Flaherty (SP, Cardinals) and Rhys Hoskins (1B/OF, Phillies) in the list of contenders. 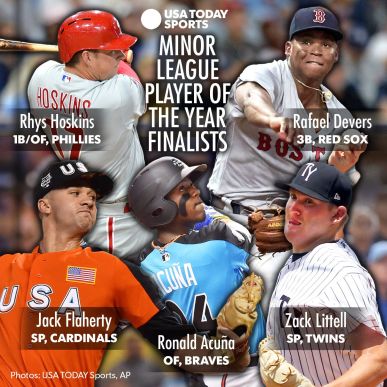 Any one of these guys could win it and every one of them are likely deserving; but since I’ve seen Littell pitch multiple times for one of my favorite teams, I want to make a case on his behalf.

Littell, who started the year with the NY Yankees in Tampa, pitched himself to a 9-1 record. He earned himself a promotion to the AA affiliate Trenton Thunder. This is where I first heard of the guy and wow, did he make an impression.

Posting a 5-0 record with the Thunder including two separate outings when he fired 10k’s each, this kid made me even more excited about the Yankees future than I already was. When you consider we have prospects like Gleyber Torres, Clint Frazier, and Chance Adams, we Yankee fans have a lot to look forward to. Littell made it even better.

Then, we traded him in the Jamie Garcia deal. He moves from Trenton, NJ to Chattanooga, TN and begins his tenure in the Twins system. I kept watching each start (or listening online), and in six starts earned 5 wins, no losses and one no decision.

Let’s do the math. 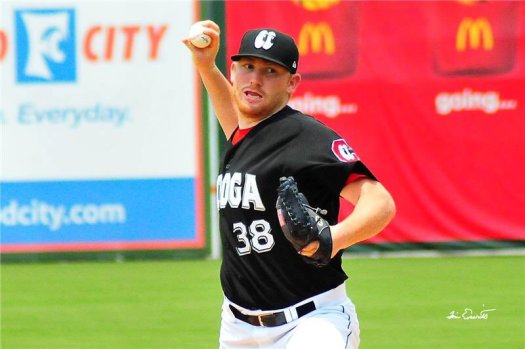 I am no a scout. I’m not a pro. I have never been either and maybe I listen to too much NY Sports Talk radio. But 19-1 doesn’t just happen. That isn’t luck or doctoring a ball with a Blarney Stone. That takes something much more.

Yes, he has had some solid run support. The Thunder and Lookouts can hit and they are leading their respective divisions and they’ve scored some runs for him when he needed them. there is no denying it, but it has to be more than that.

You’d agree with me would you not, that the role of pitcher is more than fastballs, curves and off-speed stuff? it requires patience, cunning, a little risk taking and good judgement. These are important items in this thinking man’s game, right?

Littell has a good dose of that necessary brainpower and seems to be getting wiser with each start.

When I watch him pitch I don’t see him as the overpowering, I’m gonna shave your stubble with a 4-seam fastball intimidation approach type of pitcher. He thinks things through.

Does he think too much?

Does he get rattled and if yes, is he too hard on himself when he does?

Still no idea. Still not in his head.

He probably does. I mean, we all do. But what I saw in person, and what I have watched on my computer screen, is the deliberate and thoughtful pitching approach of a ballplayer who knows his future is dependent on far more than a strong arm and a filthy curveball.

That’s what you don’t see or immediately assume in a 19-1 record. 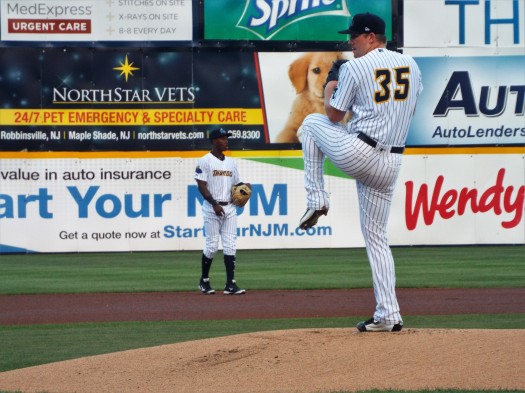 Zack Littell with the Trenton Thunder earlier this year

He makes mistakes of course. Ask the guys he’s plunked, there’s been like 14 of them (ha ha, sorry, just kidding) … but in his defense no one’s perfect. Besides, none of his mistakes have been overwhelming. None of them have been very costly. That doesn’t just happen either. That’s repeatedly using sound judgement in pitch selection and execution.

It is also being willing to make the mistakes he needs to, while simultaneously working to establish a balance of technique, strength and discernment. Clearly he has the raw talent to do well in baseball. His numbers support that beyond the W/L. He has an average of 8.2k’s per 9 innings pitched and 2.3bb/9 innings and a Strikeout to Walk ration of 3.63 to 1. He hasn’t lost since April 21. He is a pitcher who will outsmart hitters. Selfishly, those are my favorite pitchers in baseball.

So, my argument on behalf of Littell is this: to have wisdom at such a young age of 21, is good fortune. Maybe even a gift.   But to process it, use it knowingly and execute effectively as a result of it … well … that may be a bit of wisdom beyond his years.

Baseball is and will always be a thinking man’s game and I feel this should be taken into consideration when the panel votes for their USA Today MiLB Player of the Year.

But when I look at his 19-1 record, it is clear he has learned from past starts,  is present and in the moment at game-time and he is carefully and methodically constructing a future as a big league ballplayer using more than his arm.