With the exception of every dog that ever lived, and a relatively select group of fine human beings, I can’t say I have loved anything more than the game of baseball.  A feeling proven once again last night.

I took in another game.  Trenton Thunder (Yankees AA affiliate) and the Binghamton Rumble Ponies (Mets AA affiliate).  Sitting on the third base line, just to the left of the dugout (when facing), three rows up on the aisle.  Oh, this was a nice seat.  I figured since my May 13 game got rained out, I could exchange that ticket for this one.  I was joined by 6,029 others and more than a handful were Met fans.

Despite a total of nine runs scored, I saw some good pitching.  Yefry Ramirez was solid through the first three until he was pulled (broken nail on his pitching hand).  Nestor Cortes came in, letting up three runs over the next six innings to get the win. 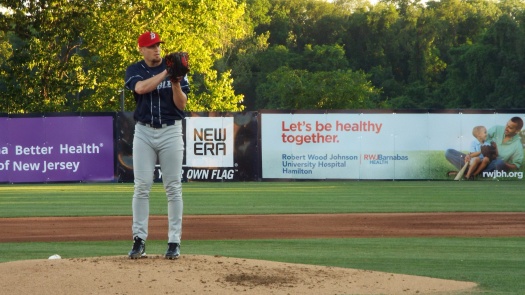 So, why would I focus on the losing pitcher?  Because he is what I remember most when I think about last night’s game.

Listen to me when I tell you, the guy looked fierce on the mound.  Sure, Miguel Andujar took him deep in the bottom of the third, and maybe the Thunder scored four runs off the guy in total.  But there is no doubting the intimidating force on the mound.  Look at him.

Don’t believe in God?  Bet you’ll start second guessing that notion once you set foot in the box against this guy.  Seriously, would you wanna be sixty-feet and six inches from a blazing fastball coming from a dude looking at you like this?

For a guy who looked like he could eat batters for lunch, one thing I noticed was his patience coming off the mound. There were more than a couple of instances when mental errors by teammates cost his arm more pitches than I thought necessary.

But unfortunately for Beavan, but not for us Thunder fans, the Ponies didn’t impress at the plate to give him enough run support.

I hope this kid makes it back up to the majors. I really do.  I’d love to see it happen. My favorite baseball stories are always about the guys who grind it out in the bus leagues, have a healthy stint of time in the bigs, get sent down, then fight like hell to get back.  Once they get back they’re better in so many ways.

I’m rootin’ for this big dog from Texas to be one of them.

The game put the Thunder (34-18)  an additional game ahead of the Rumble Ponies (29-19) in the Eastern League standings with a three game lead.

Here are a bunch of pictures from the game.  Enjoy. 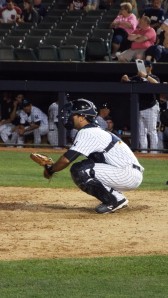 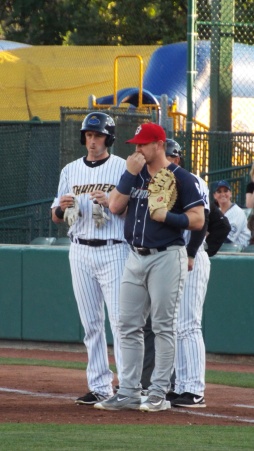 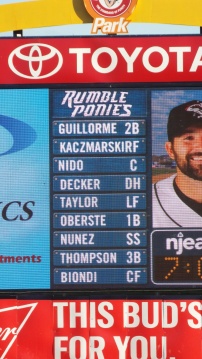 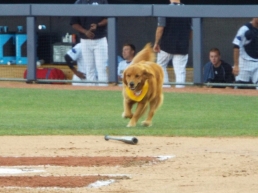