With his beloved Miriam 12 months removed from this life and on to the next, Arthur Pepper discovers a charm bracelet he has never seen before and thus his adventure begins.

I will admit as much as I enjoyed this book – and I did, very much – there were times I found it predictable,  I also found no harm or foul in that.  Familiarity doesn’t always breed contempt and sometimes it has its place.

I would, however, gently caution you with one thing…and this is NOT a spoiler.  When 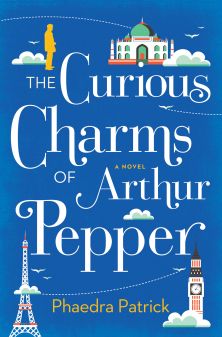 others make comparisons to books like A Man Called Ove, The Unlikely Pilgrimage of Harold Fry, Lillian Boxfish Takes a Walk or the heartbreakingly beautiful novella And Every Morning the Way Home Gets Longer and Longer, it is my opinion that they shouldn’t.  I will tell you they have two things in common, which are.  (1) It is a story of someone in the autumn of their years and (2) our protagonist is a beautiful human being.

But they are different.  Ove is not Harold, nor are Lillian and Grandpa anything alike.  Same goes for Arthur.  They are all their own people, with their own set of circumstances, with their own sense of humor and troubles and family.  Outside the two similarities I noted, I think that’s about it.

My point?  The Curious Charms of Arthur Pepper stands on its own.  The book’s author is Phaedra Patrick and this is her debut novel.

A small confession on my part, I have found after reading this I seem to be drawn to books about those who are in the twilight of their years.  Books like the ones I mentioned above always seem to occupy that same spot in my heart, and The Curious Charms of Arthur Pepper was no exception.

The short story is this: A year after a man in his late 60s has buried his wife of 40 years he comes across a charm bracelet of hers he had never seen before.  One charm leads to the next in its own way, providing vague/eerie/cryptic clues to a life before Arthur and Miriam became Arthur and Miriam.

I loved Arthur immediately.  Then I found I loved  his spirit and break from the routine as I got to know him.   I warmed at his patience in listening to others regale him with stories of this woman he spent the better part of his life with; this woman he thought he knew. This woman, the love of his life, who lived a life he never knew.

That may have been my favorite part of the book, his emotional growth.  Watching him separate himself from whom he has always been.  He became inspired by the memory of his wife.  Even at times when he seemed hesitant in wanting to know her history, he pushed to learn it anyway.  I think that was hard for him.   When he made those decisions it was if his own personal feelings no longer mattered.   Knowing more of his beloved Miriam was what he wanted  There was love, deep love, that persuaded him to reach further, and dig deeper.  I admired that in him.  He might be a bit of a stronger man than I, if I am being truthful.

A Book Group Discussion question I found asked if I were bereaved after a long marriage would I devise strategies and routines just to get through the day?  I singled out this question because I wondered the same thing as I was reading the book.

The answer is an indisputable yes.  I have already spent nearly eight years with Stacy and I have never known happiness like this in my first 40 years of living.  Give me 40 years hence with this same woman, growing together in love, friendship and companionship at the same pace we have been going at, then yes, I would lock myself away in my house too.  Like Arthur, I too would behind curtains when someone knocks at the door.

Arthur Pepper is a fine man.  The spirit and sense of adventure his Miriam lived with as a younger woman is akin to what I see Arthur doing today in his later years.  If he is blessed to get a few experiences of travelling and adventure of his own, then all the better.  At least this way, when called to meet his maker, Arthur and Miriam will have no shortage of new topics to discuss over tea.

One thought on “Arthur Pepper Stands on His Own”