Three people.  Three books.  Couple bottles of wine.  An indescribably sumptuous chorizo meatloaf with Manchego cheese.. A spirited and engaging discussion.  All this came together one night this past week and made for the perfect book group.

Our friend Evy joined Stacy and I in reading and discussing Hillbilly Elegy by J.D. Vance, The Curious Charms of Arthur Pepper by Phaedra Patrick and The Winter in Anna by Reed Kiram.  Three books.  One month.  All worth our while.

In Hillbilly Elegy we chatted about Vance’s exploration of the Rust Belt culture, white working-class Americans, social and class declines, and the critical role family and loyalty played in his life.  Mind you, by no means can I wax eloquent on the topic, but I can say I walked away with a much better understanding of that world than I did when I started.  Will this inspire me to learn more about it, to become more socially conscious? Perhaps, but if I am being fair, it is not likely.  I have a number of personal causes I contribute to financially and emotionally.  I am not prepared to take on another.

It took us about 20 minutes of discussion to cover all we needed to.  As good as it was to read, and interesting as it was to learn about, it did not really move any of us.  At the same time, we were glad we invested the time in reading it.  I am not sure if that makes the right amount of sense, but either way, it is no less true.

The Curious Charms of Arthur Pepper garnered a bit more energy to the group dialogue.

Our titled protagonist was as charming as the jewelry that hung from his now deceased wife’s bracelet.  The people he met, the adventures he went on, the discovery of this life lived before he and his wife met.  All of it made for a fun read.  Yes, predictable at times, but not unforgivably so.

There is something special about a story of someone in the autumn of their years that I love.  It could be the look back.  It could be that I see them just as flawed as any of us.  It could be because they were young once too, with their own plans and schemes all lined up for their life, and nothing went they way they expected it.  That always triggers a bit of a crooked smile in me when I read it.  But above all else I love how there is a deep and loving kindness in their hearts.  They may not have seen it all, but they’ve seen a great deal, and with that comes a peace and wisdom I find myself craving as a middle-aged man.

Yes.  I liked The Curious Charms of Arthur Pepper … mostly because of Arthur himself. Such a dear man.

Then….it came.  The discussion that took us twice as long as any other.  Impassioned.  Frustrated.  Understanding.  Thoughtful.  Did I say frustrated?  Reed Karaim’s The Winter in Anna.

It’s the story of a woman, narrated by a man she knew and called friend. It opens with her death, a horrific and body shuddering suicide in a motel room and ends with a better understanding of why.

It was dark.  I often thought of the writer at his computer or typewriter and imagined the depths of pain and darkness he slipped into in order to write something so tragically compelling.  I wondered how hard it must have been to climb out of that same darkness and resume a normal life when it was time for dinner and time to socialize with flesh and blood human beings in his presence.  Man, how do you flip that switch?  Or do you not and your family needs to cope and accept you as is?

I digress, but, I did love it.  I truly loved it.  It did what I want every piece of fiction to do when I read it.  Make me think it is non fiction.

Mr, Karaim nailed it for me.

Evy loved it too.  Much for the same reasons, I believe.

Stacy? Well, she repeatedly spoke of how beautiful the writing is, but how she loathed both Eric and Anna.  We agreed on our dislike of him as a young man but I felt he was likable as an adult.  She did not.  Anna drove her up a tree.  Her suicide was borderline unforgivable and aggravatingly selfish.  I cannot say too much because I don’t want to give anything away but suffice it to say what I heard was Stacy felt Anna lacked the courage she needed to do the right thing … and not choose to die.

I can understand where she is coming from.  I can.

With your indulgence, I would like to help you understand where she is coming from, too.  Stace works with the elderly.  She has for (nearly) 19 years.  Most live with dementia.  This is a woman who fervently believes one’s life choice is their own.  She has told me a hundred times she is planning an escape route of her own if she becomes confused in her older age.  I totally get it.  Dementia and Alzheimer’s is such a destructive disease.  Stacy lives and works with it every day and has for nearly two decades.  Yes, I think she is a saint, but that’s not the point in this blog.  She is a woman who deeply understands and respects life.  She also believes it is our own to make the choices we feel is best.  If you are suffering and if you are dying or deteriorating, then the choice ought to be yours.  At least, that has always been my interpretation of her beliefs.

That was why, after reading and discussing the events of this book, that I was shocked – completely and utterly shocked – that she wasn’t nearly as forgiving of Anna as I thought she would be.

But this is why we read, isn’t it?  To be taken away? To be transported?  To give us a great story to discuss, debate and reflect on with those we connect closest with?

Yeah.  This was the perfect book group.  Such great stories.  Such compelling and heartfelt arguments.  Such a deep and fervent love of reading.  Such incredible women I surround myself with.

It’s OK to be a little envious.  Hell, if I weren’t already me, I would envy me too.  I am surrounded by really smart people with Stacy and Evy, and nothing could be more beautiful.

PS NOTE:   There is one major difference in the reading of The Winter in Anna I think is worth noting.  I read this believing the age difference between the two was eight years (Anna 29, Eric 21) while Stacy thought Anna was late 30’s early 40’s.  If I perceived the age gap that large, I would read it a little differently too.  Anna is still Anna and she owns a piece of my heart.  But my feeling(s) toward Eric likely would have changed and probably not for the better.  They would have mirrored Stacy’s more.

Next Month’s Books are:  Himself, Idaho and Lincoln in the Bardo 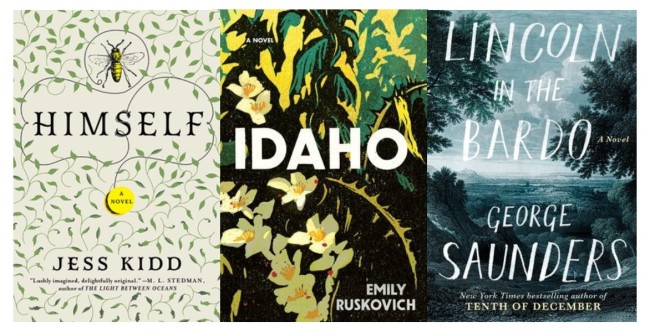